For the last few years I have been saying that the 21st century skills that educators, policy makers, newspapers, industry, and educational/societal think tanks have all been propagating to the point of having hissy-fits is pure BS> This isn’t because the skills aren’t important, but rather because most, if not all, of these skills were needed in the previous century with possibly one exception.

But first things first: What are these ‘holy’ 21stcentury skills? Though they have been stated in many places and many ways, with each presenter giving them their own special flavourings and colourings, what they boil down to is: 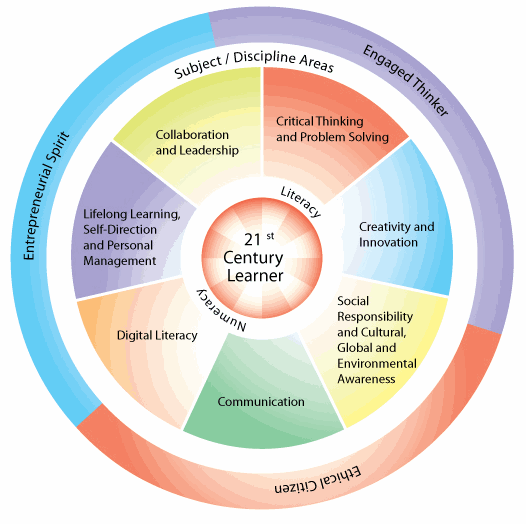 Though I have said in the past that skills like critical thinking, problem-solving, creativity, communication, collaboration, … have always[1] been important, this morning while waiting for a 7:30 flight from Helsinki to Oulu a podcast from one of my favourite programmes – Radio Diaries – beautifully drove this point home. It was a 20 minute story called “Who put the P in NPR?” For those of you who find this unintelligible, NPR is National Public Radio; “a privately and publicly funded non-profit membership media organization that serves as a national syndicator to a network of 900 public radio stations in the United States”. The programme I was listening to was essentially an interview with one of NPR’s founders, Bill Siemering. In that interview Siemering read parts of NPR’s first mission statement, which btw is still given to all incoming employees. The statement read:

National Public Radio will serve the individual, it will promote personal growth, it will regard the individual differences with respect and joy, rather than derision and hate. It will celebrate the human experience as infinitely varied, rather than vacuous and banal. It will encourage a sense of active, constructive participation, rather than apathetic helplessness…

The total service should be trustworthy, enhance intellectual development, expand knowledge, deepen aural aesthetic enjoyment, increase the pleasure of living in a pluralistic society, and result in a service to listeners which makes them more responsive, informed human beings and intelligent, responsible citizens of their communities and the world.

It would speak with many voices and many dialects. The editorial attitude would be that of inquiry, curiosity, concern for the quality of life, critical problem solving, and life loving. The listener should come to rely upon it as a source of information of consequence, of having listened as having made a difference in his attitude toward his environment and himself…

National Public Radio will not regard its audience as a market, or in terms of its disposable income, but as curious, complex individuals who are looking for some understanding, meaning, and joy in the human experience.

If you read it carefully, you’ll see that NPR’s mission was aimed at many the so-called 21st Century skills. The only thing is that NPR was started in 1969, a bit more than halfway through the 20th century. In other words, so much for the novelty and timeliness hype. This emperor has no clothes!

Dear readers: Please don’t jump to the wrong conclusion here. I’m not against the need for acquisition of all of those skills. I’m not saying that they’re not necessary and that they shouldn’t be integrated into the curriculum (note here the words “integrated into” and not “part of”). What I am saying is that almost all of them were of the utmost necessity for a person to function well in the previous century or possibly even in all centuries since the Enlightenment/Renaissance. So please do me, and actually all of us, a great favour and stop propagating them as if they were something new. If they weren’t taught in previous generations of schooling, you wouldn’t be able to do what you normally do every day as teacher or scientist (see my blog from February 2014 – Sorry it’s in Dutch – Als het onderwijs zo slecht is, waarom weet jij het dan zo goed? [If education is so bad: Why are you so damn smart?]). Stop parroting the bullshit being spread and the snake oil being sold about them by eduquacks of all shapes and colours.

Oh, yeah. And what are the skills that are new? An external PhD candidate of mine – Sharon Favaro – summed them up beautifully (Conceição, 2013), namely:

Nederlands: Prof. dr. Paul A. Kirschner, dr.h.c. is Universiteishoogleraar en hoogleraar Onderwijspsychologie aan de Open Universiteit. Hij is ook Visiting Professor Onderwijs met een leerstoel in Leren en Interactie in de Lerarenopleiding aan Oulu University (Finland) waar hij ook een Eredoctoraat heeft (doctor honoris causa). Hij is een internationaal erkende expert op zijn gebied en heeft zitting gehad in de Onderwijsraad in de periode 2000-2004 en is lid van de Wetenschappelijk Technische Raad van SURF. Hij is Fellow of the American Educational Research Association (AERA; NB de eerste Europeaan aan wie deze eer werd toegekend), de International Society of the Learning Sciences (ISLS) en van de Netherlands Institute for Advanced Study in the Humanities and Social Science of the Royal Dutch Academy of Sciences (NIAS-KNAW). Hij was President van de International Society for the Learning Sciences (ISLS) in de periode 2010-2011. Hij is Hoofdredacteur van de Journal of Computer Assisted Learning en Commissioning Editor van Computers in Human Behavior, en hij is auteur van Ten steps to complex learning (Routledge/Erlbaum). Hij schrift ook regelmatig voor Didactief (de kolom KirschnerKiest over wat docenten kunnen met wetenschappelijke resultaten). Hij is ook medeauteur van het boek Jongens zijn slimmer dan meisjes XL (EN: Urban Myths about Learning and Education). Hij wordt gezien als expert op veel gebieden en vooral computerondersteund samenwerkend leren (CSCL), het ontwerpen van innovatieve, elektronische leeromgevingen, mediagebruik in het onderwijs en het verwerven van complex cognitieve vaardigheden. English: Paul A. Kirschner (1951) is Distinguished University Professor and professor of Educational Psychology at the Open University of the Netherlands as well as Visiting Professor of Education with a special emphasis on Learning and Interaction in Teacher Education at the University of Oulu, Finland where he was also honoured with an Honorary Doctorate (doctor honoris causa). He was previously professor of Educational Psychology and Programme Director of the Fostering Effective, Efficient and Enjoyable Learning environments (FEEEL) programme at the Welten Institute, Research Centre for Learning, Teaching and Technology at the Open University of the Netherlands. He is an internationally recognised expert in the fields of educational psychology and instructional design. He is Research Fellow of the American Educational Research Association and the Netherlands Institute for Advanced Study in the Humanities and Social Science. He was President of the International Society for the Learning Sciences (ISLS) in 2010-2011, member of both the ISLS CSCL Board and the Executive Committee of the Society and he is an AERA Research Fellow (the first European to receive this honour). He is currently a member of the Scientific Technical Council of the Foundation for University Computing Facilities (SURF WTR) in the Netherlands and was a member of the Dutch Educational Council and, as such, was advisor to the Minister of Education (2000-2004). He is chief editor of the Journal of Computer Assisted Learning, commissioning editor of Computers in Human Behavior, and has published two very successful books: Ten Steps to Complex Learning (now in its third revised edition and translated/published in Korea and China) and Urban Legends about Learning and Education (also in Dutch, Swedish, and Chinese). He also co-edited two other books (Visualizing Argumentation and What we know about CSCL). His areas of expertise include interaction in learning, collaboration for learning (computer supported collaborative learning), and regulation of learning.